“You guys are the best!I appreciate all the work you do.”- ally sonw AUSTIN 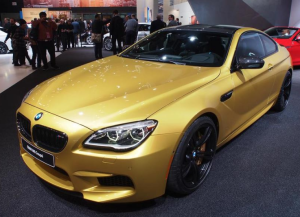 Coupe, gran coupe, convertible – no matter which model you choose the BMW Series 6 offers no shortage in styling and extravagance. All three models up the level of luxury found in other BMW sedans and coupes. That added luxury is reflected in the price. New models start at $76,600 for the Coupe and go all the way up to $121,200 for the Alpina B6 Gran Coupe.

But the team at German Auto Center has found that for the most part you get an exemplary driving experience for the higher price tag. If you don’t mind paying a little more for a luxury car and enjoy cutting-edge technology you are well within the target market for the Series 6.

Slight adjustments have been made to the newer models, but all in all the Series 6 has been highly impressive right from the start. More power, all-wheel drive, a four-door model and a plethora of tech components have been added to the mix since the first generation. In the last five years the Series 6 has been fine tuned to the point that it’s now an all-around smashing success.

At high and low speeds the handling and performance of today’s Series 6 is worlds away from the first generation that sold from ’77-‘89. The athletic styling mirrors the turbocharged engine under the hood. It’s not quite as nimble or sporty as other BMW models, but the Series 6 is far above its competition in the way of handling and power. The latest BMW Series 6’ performance specifications include:

As soon as you slip behind the wheel of the expertly designed Series 6 the cockpit immediately stands out. The Series 6 comes equipped with the Dynamic Digital Instrument Cluster that tells the driver everything they need to know for the smoothest ride possible. The gauges are large and easy to read without looking garish while the 10.2 inch touch display screen is super sleek. In the Series 6 everything is within easy reach and looks completely cohesive.

The back is somewhat tight, even in the Gran Coupe model, despite the fact the Series 6 includes BMW’s largest coupe. But the Series 6 makes up for that with extreme comfort up front. The comfy, adjusted front seats cushion the driver and passenger with plush leather, lumbar adjustments and heat on chilly days. Even the stitch work is sleek and sweeping like the rest of the interior.

Sure, the Series 6 is designed to offer much more than the average coupe or convertible. But that doesn’t mean there isn’t room for a few extras that up the luxury factor and driving experience. Add-ons and extras for the Series 6 include:

Common Problems, Service and Maintenance on the BMW Series 6

The first generation of the Series 6 will most certainly need regular upkeep to stay on the road, but the reliability of the third generation has been noted by experts, critics and drivers. Other than standard maintenance that can be expected with any vehicle, there are very few issues that are considered common problems. Here’s a look at the most common BMW Series 6 repair in Austin that we’ve fixed:

BMW Series 6 maintenance in Austin is essential. Drivers in Central Texas will come across a wide variety of weather conditions from floods to droughts. The road conditions will also vary significant are one area of the metro to the next.

It takes a keen understanding of all the technical components in the newest Series 6 models, which may require the help of an expert. BMW Series 6 Austin owners know they can trust German Auto Center to take care of their luxury chariot. We’re a Bosch-authorized service center that works on BMWs every single day. Our team is fully equipped to handle BMW Series 6 service in Austin as well as repairs and performance upgrades.